In the last two years Beth and Danny have achieved Gold in the National Championships and become winners of the Sled Dog Association of Scotland Championships in the two dog and four dog Open classes. 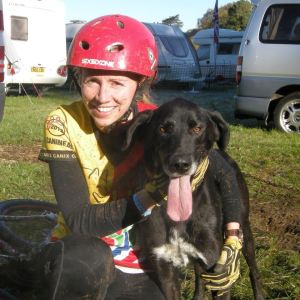 They’ve also raced at the World Championships on snow in Norway in 2011 and the European dry land championship in Germany in 2012.

Beth and Danny also compete in CaniX competitions in Bikejor with one of their dogs and have won the Pembrey race three years in a row…and he is only 4 years old!

How it all started 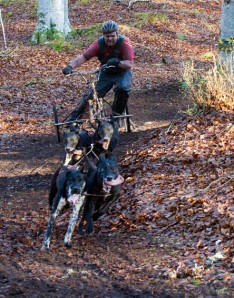 Bethan and Danny spent most of their lives growing up in Wales and have lived and travelled all over the World. In 2005 they both decided to settle down and get a dog. That’s when their lives took a big turn they had never predicted!

Danny decided to get a Malamute puppy and Bethan got a German Wire-haired Pointer puppy.  Then at puppy classes they started talking to sled dog people and they become more and more interested in the sport. The Malamute turned out to be a natural, but it took a while to get the pointer running!

In 2006 they moved to Edinburgh, so that Bethan could follow her dream to become a vet. They wanted to continue with the sport so joined the Sled Dog Association of Scotland, which accepts any capable breed. Bethan and Danny were welcomed with open arms and they learned so much from people like Keith Johnston, Steven Lyndsay and Shane Murray, who encouraged them to be the best and have a lot of fun doing it!

Three years later they gained another German wire-haired pointer and formed a two-dog team for Beth and four Scandanavian Hounds to make a four-dog team for Danny.

Now they have two more Scandanavian Hounds (from Keith Johnson) and have produced a very fast 6 dog team who are all capable of being leaders.

Sled dog racing has become a very competitive sport and this last season has been a tough season as there are a lot of young dogs on the scene.

At the start of the 2011 season, Bethan and Danny added a baby girl (Eira) to the family. Bethan managed to squeeze in a few races, winning the National Championships and Danny won the SDAS Championship with 4 two year olds!

Eira loves the dogs and always enjoys a weekend of camping no matter what the weather is!

Big successes along the way

Beth says, “Both of us aim to compete at more competitions abroad and continue to compete in the UK. Danny has qualified for the Italian World Championships in 2013 and thanks to CSJ, this will be possible.”

Here’s what Beth told CSJ about our food…

“A good complete diet for our big strong dogs, we don’t need to add anything else. They have shiny coats and nice firm faeces – the only indication of a good food (that’s the vet talking!).”