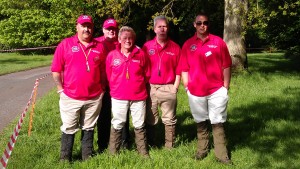 The Wales Gundog team at the Highclere World Retriever Championship 25th  – 27th May 2013 have sent us a much appreciated big thank you for our support and continued sponsorship.

The team: Alan Rees, Mark Bettinson, Kevin Lewis and Kevin Downs, captained by Jamie Bettinson, finished a very creditable 7th overall out of 14 teams, although there was a late withdrawal of the Scotland Team.Each dog was picking 16 retrieves over the 10 allocated tests. In addition, there was a captain’s choice of dog, picking the last retrieve for the team, with a long 300 yard unseen over two dykes and a field of rush. This was picked by Alan Rees, who scored 19 out of a possible 20 and secured the best result for the team.

There were no failures on any of the tests from the Welsh dogs.

The scores returned were:

This was a very close run competition in mainly dense cover and woodland. The tests were well set out to challenge the skilles of the best dogs and handlers from the UK and across Europe. There was very little room for error over the two days and the tests set the competitors on a very tight course.

Allan Rees, Captain of the Wales Gundog Team said “It was a very enjoyable two days – Wales giving a good account of themselves – and only able to compete at this prestigious event thanks to the support of CSJ.” Thanks Allan.