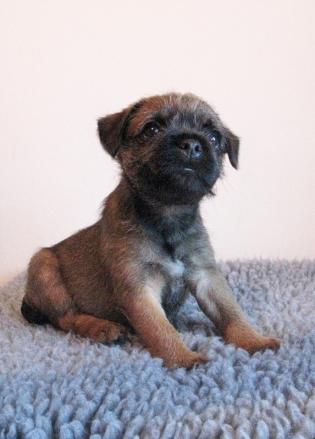 “My little bitch was suffering from such severe onset mastitis that the vet had given her very strong anti-biotics which meant that she could never be allowed to feed the puppies and so the problem of hand feeding them every two hours 24/7 for at least the next two and a half weeks.

The daunting prospect loomed large as I drove home from the vets at 03.00 in the morning in the pouring rain and my one consolation was that I’d had a tub of Lap-It-Up! milk powder delivered ready to wean at the usual age of 3 weeks.

Knowing that it was a soundly researched  and developed product also good for bitches in whelp, as a conditioning boost for ill dogs and as a tasty hydrating drink for competing dogs I made up a warm solution as soon as I got home and started to feed my tiny Border Terrier puppies.

They took to it immediately and never looked back, consistently gaining weight as they should and having super-shiny coats and firm poohs!

After fully introducing solid food I continued to give the puppies a drink of Lap-It-Up! after their last meal each night and they would sit at the side of their pen waiting for it and squealing with delight as I put the dish down.

I would recommend Lap-It-Up! to everyone about to breed a litter and also to keep by in case of illness or hot weather to encourage their  dogs to drink.”