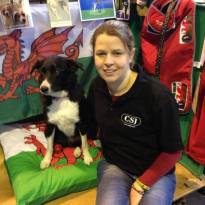 Eira and I represented Wales at Crufts in the International Freestyle competition. Performing at Crufts in front of a packed main arena crowd of 6000 people was the most amazing experience ever.  People ask me if I was nervous, but quite honestly I was just totally buzzing! 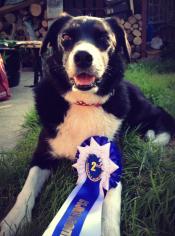 It was an early start to my Crufts day, arriving at 7am to give me chance to take Eira in to the main arena and for us both to get an idea of how big it was and all the things that might put us off.  I was mainly thinking that the big armed camera might take some getting used to but Eira was more interested in the marks on the floor (to mark the position of the agility equipment), She had to make sure they were not edible before she agreed to give her attention to me. 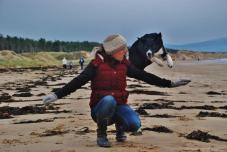 At 11.00 we were briefed and from then it moved very quickly. The event on in the arena before us was agility and the collecting ring had a jump in it for competitors to warm up.  Eira loves agility and this didn’t help her excitement – I think she was a bit disappointed not to walk out to a full agility course! 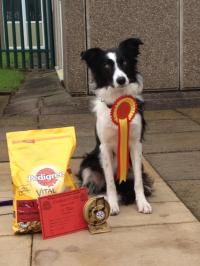 The competitor before me sadly had to withdraw as her dog was really worried and unhappy, she kept trying to run towards the exits.  Having travelled all the way from Denmark the competitor must have been gutted not to compete but it was lovely to see her putting her dog first ra

ther than trying to make her work.

The withdrawal of the previous competitor meant that we were a bit rushed in!  The actual performance

went so quickly, every time I perform this piece I struggle to believe it is 4 minutes long because it feels like 2!  I couldn’t have asked more from Eira. 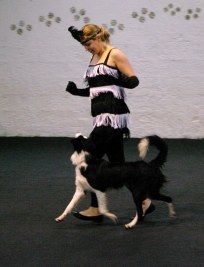 The adrenaline meant that she was even more excited than normal and that the timing and clarity of my commands wasn’t top notch either!  Leading up to the competition, she had been a bit sticky on a couple of moves, I had been practicing these moves at home and my partner said he was holding his breath in the crowd when I did them, but she was perfect.

Talking about training, I’m always asked by people ‘do I train a lot?’ I very rarely train a whole routine, I just do 5 minutes here and 5 minutes there, working on a particular move.  With Eira, once she has learnt a move it’s easy to incorporate putting it in to a routine.  The hardest bit is coming up with the ideas, music and choreography – that takes me a lot more time than training the dog to actually do it!

My scores were amazing!  Unfortunately as expected Eira barked and not just a bit – I have an ongoing issue with barking and it is sometimes worse than others. This time, she barked the WHOLE way through. The atmosphere just sent her off the scale – she must get her gobbiness from me!   The barking meant that I got some pretty hefty deductions as there is a rule that says they shouldn’t bark. 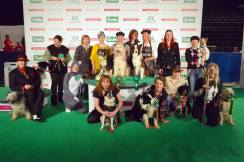 My final placing was 9th out of 10.  I would have been 5th without the barking deductions but to be honest I didn’t care where I came, the standard was phenomenal. We were up against World and European champions! I was just so pleased we put on a good performance and that Eira was happy and really showed what she could do.

I had an overwhelming amount of support and nice comments about our performance which was just wonderful and made the experience even more brilliant.  I am one very lucky girl!

One thought on “Claire Hitchins, Eire and Flic at Crufts 2014”