In September this year, 7 dogs and 8 human team members of Berkshire Search and Rescue Dog team will be taking a 5 day break from their search volunteer work to undertake the ‘3 Peak Challenge’. The challenge takes place over 3 of the UK’s largest mountains, Ben Nevis, Scafell Pike and Snowdon. In a twist to the usual 3 Peak Challenge, the team are planning to meet and train, with their Mountain Rescue counterparts on each of the 3 peaks. We will be posting live updates via Facebook and Twitter in the run up to and throughout the 5 day adventure.

Why are we doing the 3 Peak Challenge?

Every year many people go missing in the UK, some of these are regarded as High Risk and Vulnerable such as young children, dementia sufferers or those who are suicidal. Berkshire Search and Rescue Dogs is a fully volunteer organisation who are on call 24 hours a day, 365 days a year supporting Thames Valley Police to search and locate missing people and return them to their families. The team responds to callouts in Berkshire and also assists similar teams in surrounding counties. The service is provided completely free of charge and is funded through charitable donations from the public, local and national businesses. The aim of the challenge is to raise much needed funds to improve the equipment for our team that enables us to provide this important search and rescue service. Equipment requirements include updates to our team radios to make communications clearer and more secure plus providing the added benefit of GPS so our search controllers know exactly where our teams are located and exactly where they have searched.

What do we need?

Undertaking such a huge event not only involves hours of event planning and practice from our volunteers but also has a cost associated. Therefore, we are keen to establish a relationship with a Sponsorship Partner who is willing to support the overheads of the challenge in return for advertising opportunities on our dogs, team members and support vehicles. By sponsoring the challenge, your company branding will not only benefit from the positive association of an established search charity but also the successful outcome of a demanding challenge. In providing this financial support you will benefit from the media awareness generated by our Press Office.

How can you help?

Contact us now to find out more information about how your company can sponsor the challenge team or perhaps donate towards the equipment for our adventure: equipment@k9-sar.com

If you are unable to provide full or part-sponsorship for this challenge, there are still alternative opportunities to donate funds directly to our ongoing search activities to help us to save lives. Berkshire Search and Rescue Dogs have equipment requirements ranging from £1 to £10,000 so donations of any size will be welcome. Please contact us now at: fundraising@k9-sar.com

Our complete, top quality milk replacer – suitable for rearing puppies and bitches in whelp is going down a treat. Read all about it in Pet Trade Xtra!

Here are the results from the summer working test held on Sunday 1st June at Ralia Estate, Newtonmore. The prize winner looked fantastic as did the the table – festooned with cups,  whisky, Salmon oil and Fshcuits!!  The Salmon Oil went down a treat with many people asking as to what it was.

A fantastic day was had by all.

The spaniel team selection this year had 18 dogs compete, all winners, the majority being open trial winners along with wins in open tests. The top three dogs were outstanding on the day. The fourth, fifth and reserve dog being selected after a long discussion by our experienced judges Ralph Edwards and Roger Shepherd.

The retriever team selected this year based on dogs’ consistent performances this year, at the GB selection test in March, Windsor charity test in April, Highclere selection test in May, club tests, Skinners World cup in Highclere,  Sherbourne club competition, Kennel Club Test, and the 2013/14 field trial results, this team being filled with experienced handlers and dogs.

Last year’s performance can hopefully be built upon, the spaniel team only 32 points off the invincible Irish team, the retriever team 51 points off the formidable England team.

Here are the 10 dogs and handlers selected along with named reserves. 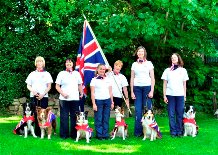 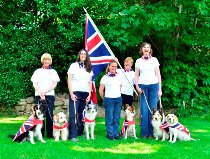 Heelwork To Music is a huge part of Kath’s life, she helps with the development of the sport, being a member of The Kennel Club, The KC Judges Working Party and The KC HTM Working Party along with being a founder member and Show Manager of a nationwide KC Registered HTM Club, Canine Freestyle GB which holds two weekend shows each year. Kath is proud of her competition successes, Crufts Freestyle and International Winner, World Champion HTM, European Team Champion HTM. And of course to have been chosen for the 4th time for this team with three dogs selected for the team! Amber and her youngest dog Denby in the Heelwork To Music Team and Spice in the Freestyle Team.

Lucy started doing freestyle in 2007 when  she realised that she was going to have to do something fun and interesting to keep Spider’s (her brainy-beagle) mind occupied. He loved learning tricks and Lucy loved writing routines so it was a match made in heaven. They started trying out heelwork to music a couple of years later and became hooked on both sides of the sport! Spider has since retired (as he has arthritis) and has left the young-uns to take up the baton! Teasel and Skiffle are amazing dancing partners. They are both quite free-spirited and will often help with the choreography of new routines, throwing in moves and ideas Lucy wouldn’t have thought of!  Skiffle especially loves an audience and will do anything for a round of applause!  Lucy says “Being selected for the OEC team is such a privilege. It will be amazing to be in Germany representing our Country! I hope it will be as much fun as I am imagining it will be!!”

Nicci began competing in Freestyle in 2006, with dogs that she ‘borrowed’ from people at her local dog club to begin with, and then with her own Border Collie, Leo in 2007. Nala came to live with Nicci in summer 2011.Initially, she was quite a sensitive puppy and lacked confidence and motivation, but with lots of patience and hard work, and the help of ‘fluffy bunny’ toys, Nala grew in confidence and began to really enjoy dancing with Nicci. Together, they progressed from Novice to Advanced level in their first year of competing and qualified for the Crufts Freestyle finals in 2014, at just 2 years old, and they came 4th. Both in and out of the ring, Nala is a total diva. She loves to be the centre of attention and has ‘being cute’ down to a fine art. Nicci says “she is such a quirky little dog and she makes me laugh every single day- I just adore her.” Nicci is very honoured to be chosen to represent her country, and is very excited about going to Germany. She says “I am very proud of everything my little girl has achieved, and I can’t wait to dance with her at the OEC’s.

This is the 3rd time that Fly has been selected to represent Great Britain at the Open European Championships, which this year is being held in Germany. In 2011 the inaugural Open European Championships were held in Denmark.  The Team were thrilled when Fly won the Individual Heelwork to Music Championship Title and also the Team Championship Title. Sadly last year Fly had to be withdrawn from Team GB due to illness but happily she has come bouncing back to health ready and willing to compete once again this year. Fly has competed at Crufts every year since the very first competition was held there, and has consistently been placed in the British Top 10 in her speciality of Heelwork to Music.  Karen and Fly’s proudest moment in the UK together was winning the Crufts Heelwork to Music Competition in 2008. Karen says “To represent my Country is a huge honour and I shall do my very best with Fly to make Great Britain proud.

Whatever the result, I can be sure I will be taking the best dog home to my wonderfully supportive family and friends!”

Lesley will find it a little strange to be at the European Championships this year and not be working a dog, but her job this year is to “look after” the team. Lesley knows what it feels like to compete in the Open European Championships as in 2011 she competed in the OEC’s in Denmark with her Bearded Collie, Angus as a member of the team representing Great Britain.  That team was very successful, winning the Team Heelwork to Music Trophy, and having the Individual HTM winner as a member of the team too! Angus and Lesley competed in both the Heelwork and the Freestyle divisions gaining an individual 5th place in Heelwork and 4th place in Freestyle. In 2013, Lesley competed at the OEC’s in Holland with her Bearded Collie, Hamish, working in the Heelwork To Music section. Lesley believes that Great Britain has a great team, a very strong team, a very talented team and even though she will not be dancing with them in the ring, she will be dancing with them in her heart. Lesley would like to say many thanks to CSJ for their generous sponsorship and…. Good Luck Team GBR!!!! 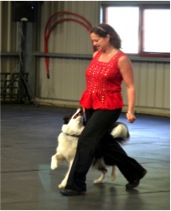 Helen Dennis and her WSD Maia are part of the heelwork to music team.Helen is thrilled to be part of Team GBR with her ‘gorgeous girl’, Maia. Helen has been doing htm for around 8 years and started with her other working sheepdog. She now trains the lovely Maia, a 5 year old bitch, Goddess Spring of Jucando, and competes at Advanced level in both HTM and freestyle. Helen says that training Maia always puts a smile on her face!

Christina and her Border Collie, Eze currently compete at advanced level in both heelwork to Music and freestyle, and performed at Crufts in 2014. They will be competing in the freestyle division over in Germany.

Well a week after returning from the World Retriever Championships – I would like to express the team’s sincere gratitude to CSJ for sponsoring the team.

Craig Perry with Cynhinfa John, Mark Bettinson with Astraglen Milo, Mike Jones with Cynhinfa Jarman of Wauniago and Alan Rees with FTCH Jobeshill Ragner of Flypatch, gave a good account of themselves on a very difficult and demanding two day working test mainly in cover and in dense forestry. Handling was of the essence for the two days.

Out of fourteen countries, accounting for 56 dogs, the test difficulty was clearly shown with over 50 Zero scores registered, unfortunately three of these came the way of the Welsh Team.

The Welsh Team finished joint 9th with France, but outside England, Austria and Germany in First, Second and Third place, there wasn’t a lot in the team positions. This was an exceptional performance from John Halstead’s England Team to win the event.

On a better note the dog selected to represent Wales in Team GB, at the Kennel Club International at Chatsworth on Thursday and Friday last was best retriever, and GB ended up in third place. Congratulations to Nigel Probert flying the Welsh flag on his performance at this event.