Please follow this link to our own CSJ Advent Calendar:

By Colin and Suzanne Spalding

The European nations were very strong and posted some incredible times

We had 3 teams selected for Team GB which was a huge honour for our small team.

We travelled down on the Wednesday and on the Thursday had vet check, course inspections, team meetings and then the opening ceremony.

The course was a very fast 5k on a flat grassy trail with teams running in 8-dog, 6-dog, 4-dog, bikejor, 2-dog scooter and 1-dog scooter.

On the Friday I had 1-dog bikejor with Dexter, our 2 year old GSP in only his 3rd race he averaged 30km ph over the 5k course and placed 19th out of 29 and was first British team home.

On the Sat I had 3 teams to run and on the Sunday 2 teams our 2-dog scooter team was out first and only 14 min later our 1-dog scooter team was due to start. This was always going to be tight and as I crossed the finish line, I heard the race commentator announce “Colin Spalding – 40 seconds”

My team of helpers took off the 2 dogs, changed my number. I ran across to the start, attached Cupar with 10 secs to my start, with many of the European nations looking on in amazement.

Diamond and Granite ran really well to finish 5th in their class and Cupar our 8 year old GSP ran 2 good races to finish a very creditable 16th. I was really pleased and proud of how our teams ran in their first international race.

The standard of competition was extremely high and the professionalism of the European teams was amazing to see. The times of 8min 20 secs for a 5k bikejor and 12 min 36 secs for a 5k canicross are unheard of in the UK.

We would like to thank our sponsors CSJ for providing food and supplements for the dogs and also the support they give us and Galen Therapy Centre for their warm up and cool down treatments on the dogs.

We learned a huge amount from the weekend which will enable us to continue improving and are so proud to have been part of team GB. 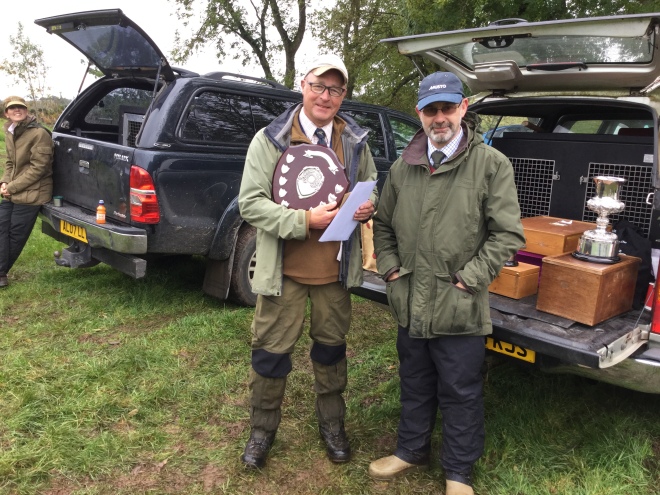 As with our three trials, we were again, generously sponsored by CSJ Specialist Dog Feeds. They have provided goody bags for all our trials. We thank them very much for their kindness.

By kind permission of Mr D Wallace, our 24 dog open stake was once again held at Strathallen, near Gleneagles. We had a super numeric entry again. Sadly one of our appointed judges, Mr Alan Rees had to pull out of the appointment at the last moment as his wife had suffered a badly broken arm in a fall, we were fortunate that Mr Mike Larkin stood for him. We would like to wish Mrs Rees a full recovery and hope that Alan may come and judge for us again in the future.

The first day was a lovely autumn day, misty but giving way to sunshine, after a good session we had 7 dogs through to the following day. 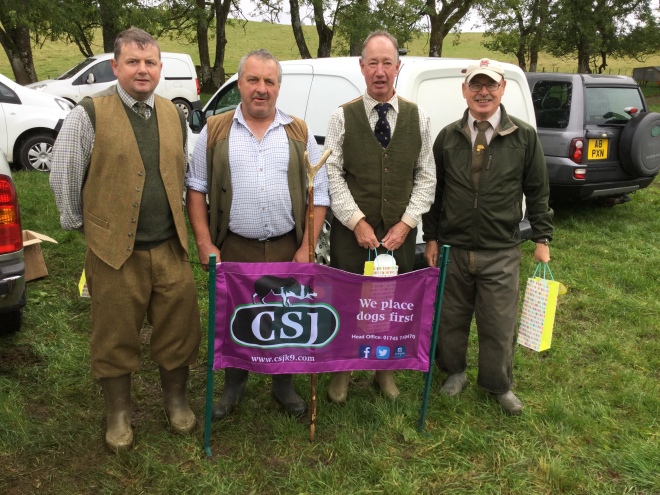 A testing morning was had and our eventual winner was Paddy Merrall with his Touchie Bilko, who was bred by LCOS member Mr G Greig.

With thanks to the guns, game carriers and to Brian Paxton for his skills stewarding. The rain stayed off till after the prize giving.

By Kind permission of Lord Cadagon and his keeper Stan Riches, we yet again, had the use of this wonderful piece of ground, fast becoming a favourite with trailers and working test folk alike.

As usual, the Club received a fabulous entry for our first trial of the season with many entrants unlucky in getting a run. Our judges for the day were Mr Roddy Forbes, Mr Steve Hore, Mr S Robertson and Mr L Macneill.

It seems that the reports from Club events at Glen Quaich come with descriptions of dire weather, this day was no better! It is the truth that your Field Trial Secretary returned home from picking up at the grouse not a week previously with sunburn! However, due to the torrential, horizontal rain, our judges were wondering if any game would show itself, but soon hares broke cover and the trial was on, the trail went at a reasonable pace with many hares being shot. It is pleasing the get a full card of winners, so many trials early in the season have either no winner or award just a 2nd or COM. 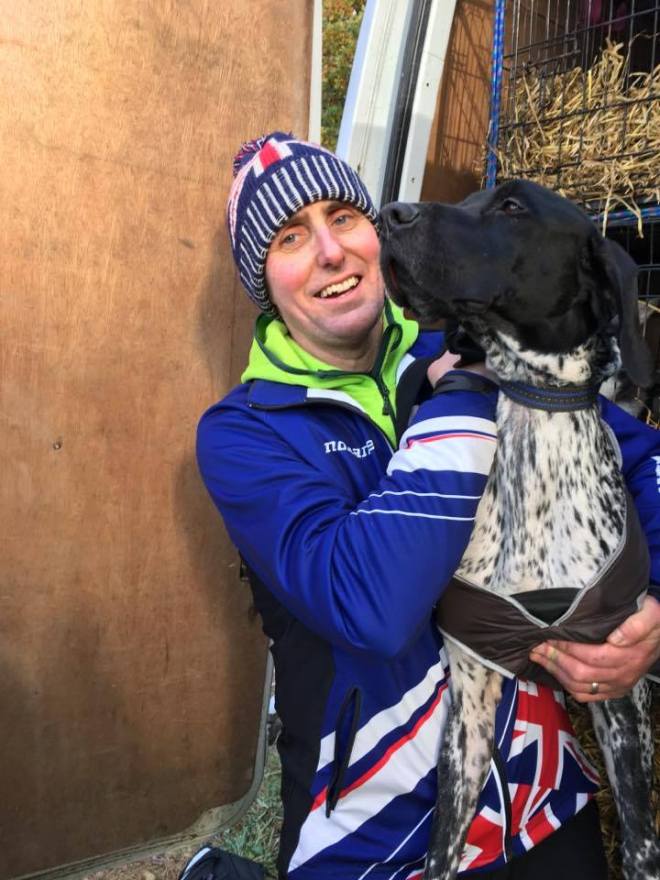 It was good to meet Colin Spalding for a chat yesterday. At 10.02 over 3 miles, he came 3rd quickest in the British Team bikejor. The conditions were excellent for the dogs.

Here’s Colin with Dexter above and below with wife Suzy and dogs Cupar, Granite and Diamond. Cupar is 8 years old and is running in the 1 dog scooter race. Both Cupar and Diamond are rescue dogs.

Lottie went to the vets today, and has been signed off regarding her cruciate ligament.  She does not need surgery, which we are thrilled about.

She absolutely loved her hydrotherapy sessions at Aqua Dogs Cardiff which has helped her so much during her recovery.
They could not get over how well behaved she was. We have been given exercises from Aqua Dogs Cardiff which we are doing and we are seeing great results, especially with her back which was so arthritic.
Lottie hasn’t lost much weight (only a few grams) as she has been resting, but now we are able to build up her exercise again and the weight will soon drop off again.  She hasn’t gained any which is fantastic. 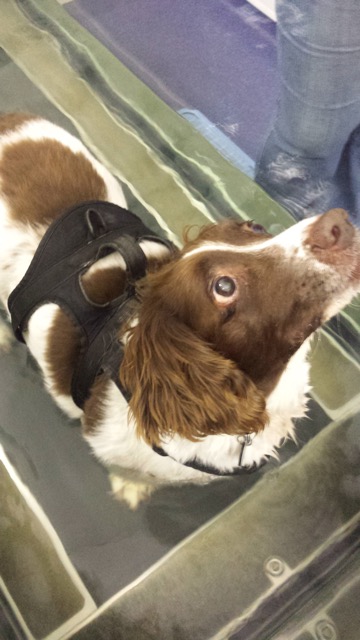 Today’s weight is 23.4kg
She is looking so much better, and her body shape is changing so much, we know she is a lot slimmer than before as she can now fit into a harness we have at home and we have been using as a guide.
She is far happier and full of life, and will be so pleased that she can join us again on our family walks. 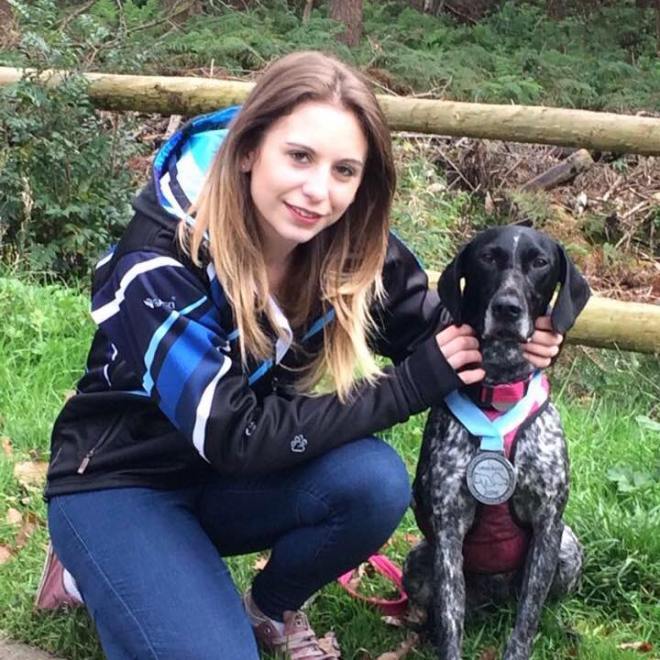 Me and Nika ran her heart out over a tough and hilly course! Pulling us from 3rd in the first day to 2nd on the second. Myself and Nika finished in Silver Medal Position.

Me and Nika had a great run with some tough competition and finished in 2nd place in the national championship series race weekend one in the elite female category.

Betws-y-Coed 5km race with milo, his first race back from 2 years of no racing and he ran well!and finished in 2nd place. Sunday was a great race as well running at Canicross anglesey’s race in Newborough forest.Nika ran her little legs off pulling us to another 2nd place.

This weekend myself and Nika are competing at the IFSS European at Thetford, I will update you with how we get on. 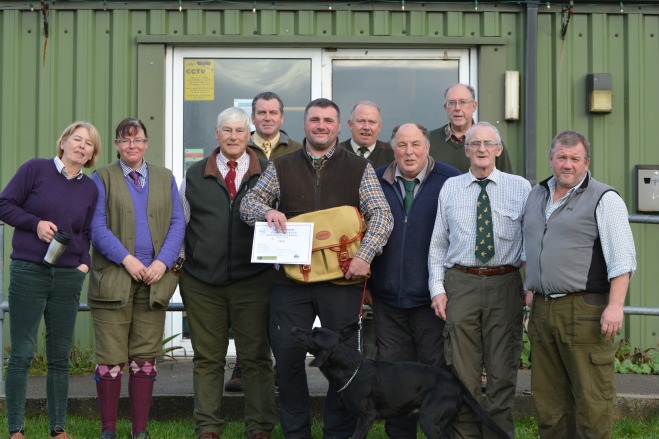 The Arfon Working Gundog Club held two Retriever Stakes this season.
On the 5th October 2016 an Open one day AV Retriever Stake was held at the Checkley Wood Shoot, Nantwich, Cheshire by kind permission of Mr Ivor Beavis. The judges were Mike Newsom, Keith Bellamy, Sheila Suzuki and Mike Allen.
No awards were made and Guns’ Choice was awarded to Norman Onens with Kestrelway Freddie lab Dog
On the 15th November a Novice AV Stake was held at The Glasfryn Shoot, Pwllheli, Gwynedd by kind permission of Mr Gwilym Jones. The judges were Kevin Bradey, Lynn Mitchell, Mike Allen and Carol Clarke.
The weather when we started off was dull and drizzly and whilst it dried out it remained cloudy.
It was a driven day and on the first drive four dogs were lost and this is how it progressed and by the end of the third drive, three dogs were left for the run off, these became two and eventually one was left to await the judges verdict.
I would like to thank our hosts for the two venues, the judges, the guns and the helpers for both days. Our sponsors CSJ Specialist Canine Feeds, Gary McCarthy of Gundog Gear and to Derek Williams of BASC Wales who presented the winner with a game bag courtesy of BASC. 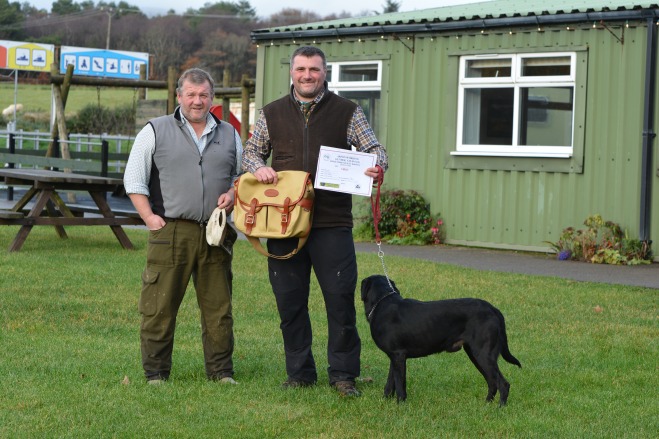 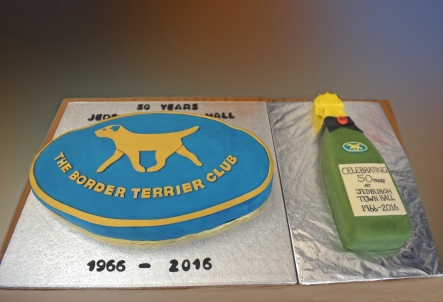 This was the 50th Anniversary of the club holding its February open show at this venue, the Town Hall in Jedburgh.  It’s a venue loved by the exhibitors because of its beautiful setting opposite the old Abbey, and with plenty of parking  close by.

The club wishes to thank CSJ for their continuing support of this show, with the wonderful products supplied by them as prizes. 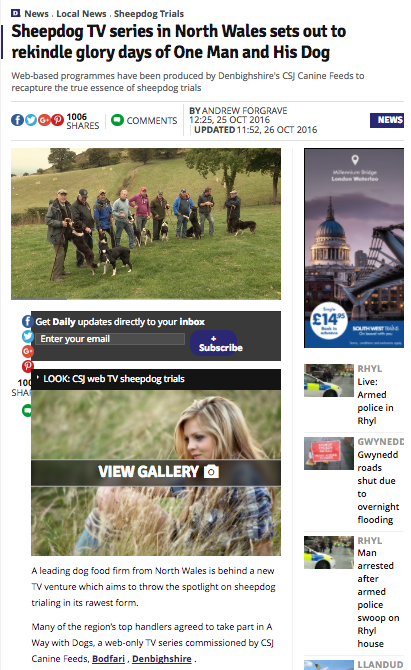 A leading dog food firm from North Wales is behind a new TV venture which aims to throw the spotlight on sheepdog trialing in its rawest form.

Many of the region’s top handlers agreed to take part in A Way with Dogs, a web-only TV series commissioned by CSJ Canine Feeds, Bodfari , Denbighshire .

The four-part series is being launched on Monday, November 14, and climaxes on Boxing Day with a grandstand final between the three top-scoring handlers.

Company boss Ceri Rundle hopes the on-line programmes will reach a younger audience and inspire a new generation of handlers.

“Wales was and remains the home of sheepdog trials and this series will enable people to see handlers they might have heard about in action,” she said.

“We’re now seeing some very good handlers emerge in other countries around the world but there are fewer youngsters getting involved in the UK.

“Hopefully this series will encourage some to take up trialing.”

The competitions were filmed at Bwlch Isaf Farm, Ceri’s home and the base for her company, now one of Britain’s leading suppliers of specialist dog food.

Ceri is a renowned sheepdog handler herself, having been the first woman to qualify for the Welsh National in 1996.

But her interest in the venture has its roots in the success of her late father H Glyn Jones, a former International champion and five times Brace winner on TV’s One Man & His Dog .

His TV success came in a different era, she said.

“These days the show relies on fast editing to interest the viewer but it means you can’t follow the action properly and see how the dogs perform,” said Ceri.

“We wanted to portray the true skills of the handler and the dog, enabling the viewer to see the straight lines to and through the hurdles and the tight turns.

“Our films will show this very clearly – allowing the viewer to understand what is going on and how the run is judged.”

Read the full story in The Daily Post online: http://www.dailypost.co.uk/news/local-news/sheepdog-tv-series-north-wales-12074388