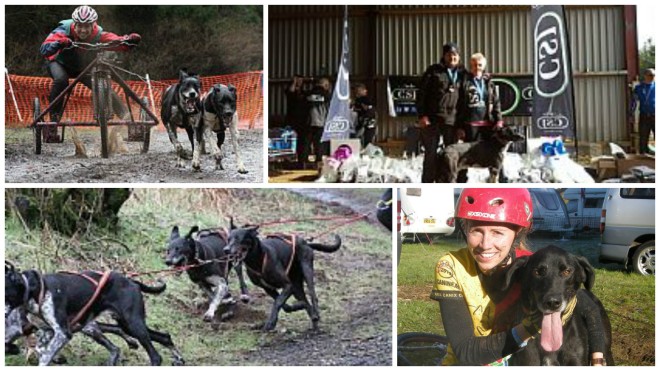 Wonderful news from Beth and Danny Fitzgerald
By Bethan Fitzgerald
“Danny’s knee is so far better than ever and he’s out on his bike a lot strengthening it up.
We’ve been keeping busy with a litter of 10 puppies.They are three weeks old now and doing fine, mum is great but I’m sure she will be walking away in the next week leaving me with all the hard work!!!!
All the dogs are on CP30 and salmon oil at the moment and looking fab.We have been given our best dog, Charlie back from Keith Johnson so Danny is over the moon as he has been able to continue to compete. So far since Danny’s op in December,he has won the two BSSF races which makes him the British Champion in the Elite bike class.
The plan next season for me will be getting back on the scooter with Pepsi and Danny will be racing Charlie on the bike. As Danny is ranked number one in the U.K. he has qualified for the World Championships in Poland this November which he will be attending.
Out of the litter, we will be picking one boy to race in the future which means I get Charlie and Pepsi for a two dog team – so it looks like we are back in the sport!!!
We are planning to race at the British championships next year where I will also continue to be the Team Vet.”
Welcome back to the sport and to the CSJ team, Bethan and Danny.