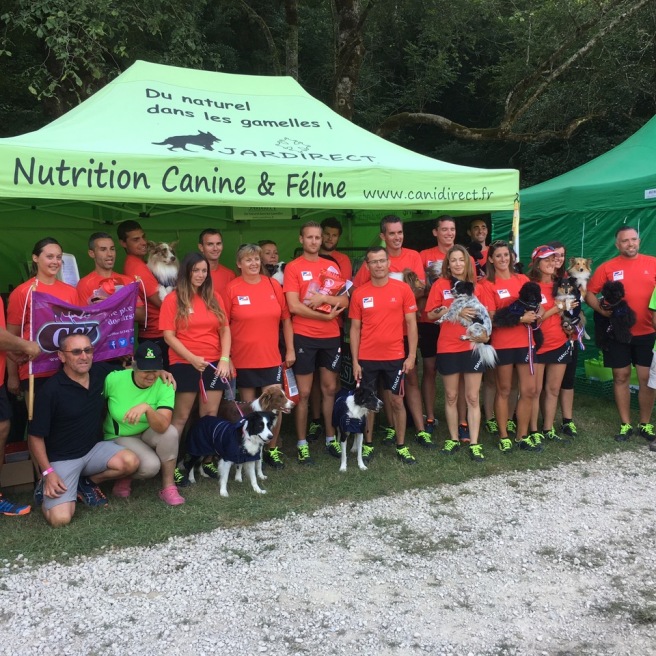 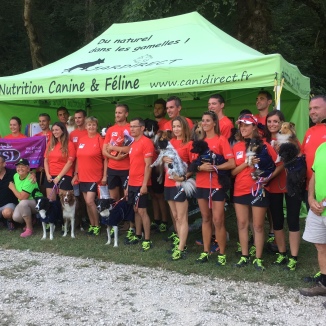 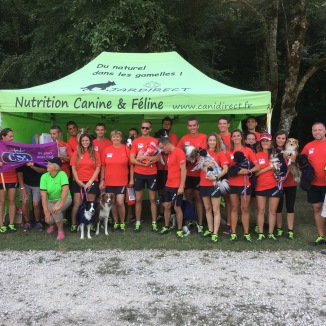 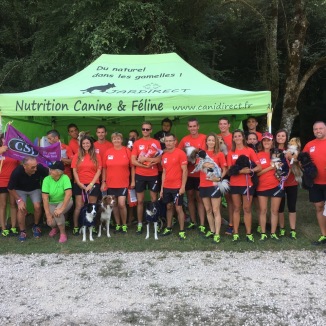 By Cliff Mtett from JarDirect
I thought you might be pleased to see the following photos – the 2 men holding
the CSJ Banner are the Head Coach and the Deputy Coach just in front of
banner with Liliane is another deputy coach.

We have put CSJ at last on the French Agility map

In the last photo you can see Liliane handing out Jardirect green bags which
contain 1 x Billy No Mates! & 1 x Go On! pouch together with 1 Pemmikan Bar. The coach next to Liliane when taking part in the agility competition wore
Jardirect colours.

We also sponsored the 42 podiums at this open

The French Team member Renaud we sponsor on an individual basis was Agility
Champion in the small category and came 2nd in the Final TITAN which was
based across small, medium and large categories. In the photo Renaud is in
the second row 3rd from the right hand side of the first photo he has been
10 years in the French National Team and he feeds CP24 to his dogs.

The other Team member we sponsor is the deputy coach Greg. He has been in the
French Team for 6 years and is now Agility Coach. He is 3rd in from the left
on our photo and is holding the CSJ banner. He often goes to the UK to coach
and is very well known and like by a number of the Team GB.  He is a Border
Collie fanatic and will help Liliane choose a BC next year as Garonne will
be coming up to 6 years of age and Liliane will possibly retire her in a
couple of years time and Greg will coach and her BC right from the very
beginning. 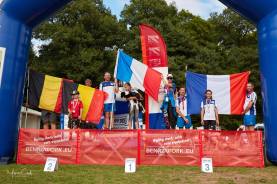 Here are some photos from the European Open Juniors. Sven.and Blitz were clear on the jumping, 6th place. Clear on the agility course, 2nd place. Overall a 2nd place for Sven and Blitz. Sven was running for the Belgium team. Team Member Karen was 2nd in Freestyle and Lucy Creek (HTM Reserve) was 3rd in HTM!!

And the competition sponsored by CSJ – thank you for my two goody bags1! I use them for all HTM Competitions for keeping bits of my costumes in!!

Find out more about HTM Team GB for both HTM and Freestyle competing at the Open European Championship Belgium 2017: https://teamgb2017.blogspot.co.uk/2017/07/htm-team-gb-uniform.html

By Mark Laker
In the next couple of days we leave for the first of this years international agility championships. the European Open for Juniors (EOJ) in Luxembourg.
This year 500 dogs and their young handlers from 24 countries will be attending these championships that continues to grow in both size and the level of competition.
Agility Team GB are sending a team of 24 dogs this year at all three height categories and in the two age groups, children and juniors. The Team were selected in February and have been training and preparing hard since then getting ready for these Championships.
You can keep up to date via the KC Facebook Group:
https://www.facebook.com/Kclovesdogs/
Agility Team GB Twitter feed @agilityteamgb
And for the first time the event is being live streamed: https://www.working-dog.com
After the EOJ we have a week back and then it’s off to Italy for the Adult European Open (EO). An exciting month of top agility competition.
I’d like to thank CSJ for all their support sponsoring the team. You’ve enabled these juniors to compete with other top handlers from around the world, gain valuable life skills and experience from an international championships and start their pathway to future top level agility competition.

5 qualifiers around Scotland in spring 2017, from the heats of a max. of 5 Small, 5 Medium and 20 Large dogs are invited to Final.  In addition the winner from the 2016 final is invited back to defend their title.

Final (full results and photos below)

“First time a mother and daughter dog have won as Scorch’s mum won back in 2008.”

“I have appeared at the Highland Final many times over the past 12 years.  I have always referred to the Final as Scotland’s equivalent to Olympia thanks to size of course and large crowd.”

“Zico (AG CH Dragonheart Dark Destroyer AW Gold), won the apparently cursed invitational event (no previous winner of this event had won the main final later on) and then broke the curse and went on to win the final, this was in 2008, a great day, a great occasion, one of the many fantastic memories this amazing dog left for me. Zico qualified for the final every year, Scorch (Morgans Dark Destroyer AW Gold)is 7 years old, is Zico’s daughter, was at the Highland 2016 Finals – Large, placing top 5 in both runs. Sunday was a great day, I got her as relaxed as I could by having her Sire ringside with her (Zuma – An Australian import kelpie, Elfinvale Legend), it was great to relive 35 seconds of the feeling that I was competing with Zico again for that short moment. Steve Richardson who got the reserve is a great friend of mine, Libby owes him nothing as defending Highland Winner and current World Champion and was great to compete against him.”

Large and small winner dogs at the CSJ Highland Trials 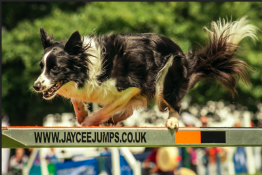 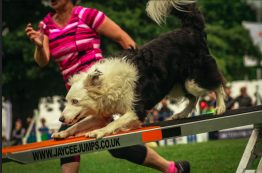 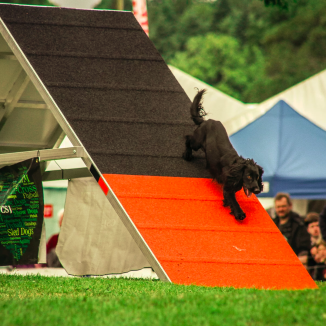 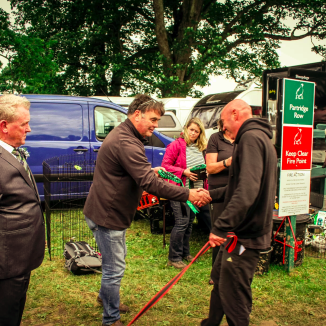 By Alan Rees, Team Captain
What a venue, the picturesque Scone Palace , the racecourse and the river Tay. The Four Nations had congregated, accepting the invitation to this inaugural event. The format of the competition had each country running 3 retrievers and 3 spaniels and started with introductions after a lone piper’s welcome.
England and Ireland fielded their Game Fair teams while Scotland and Wales were experimenting with a development team, with a number of new faces and new dogs, giving handlers and dogs an opportunity to run at this full international event.
The course for both spaniels and retrievers was long and challenging, over tall jumps, thick cover and with a very challenging water retrieve. The spaniels were marked out of 120 and retrievers out of 100. Wales found the going tough; Jamie Bettinson with 78%, Alan Rees on 72% and Vikki Stanley 68% for the retrievers and Dave Williams with 78%, Dean Melhuish with 68% and Steve Erasmus on 48% for the spaniels were locked in a 3rd and 4th place battle with Scotland, whilst England and Ireland locked horns in a battle for 1st and 2nd.
The competition ended with England in 1st, Ireland 2nd, Scotland 3rd and Wales in 4th place. Compliments go to our Scottish hosts who made us all feel very welcomed and left no stone unturned with regards to the organisation. We look forward to the event’s development.
A very big thank you to Ceri, Phil and all the staff at CSJ who accompanied the team on this trip. Thank you for your support, especially the sponsorship, which allows the Wales team to compete at these prestigious events.

Joe Hipwell and his Sealpin Gundogs had a busy weekend at the GWCT Scottish Game Fair, held at Scone Palace, Perth from the 30th June – 2nd July.

Joe and 12 dogs spent the weekend demonstrating in the main ring each day, giving ‘have-a-go’ gundog lessons at the World of Gundogs area, judging the gundog element of the inaugural Estate Challenge and judging the CSJ sponsored junior handlers event.

The junior handlers competition was very well received with gundog trainers of the future being put through their paces. All the prize winners went away with a bag of CSJ Champ! and hopefully a keen interest to pursue our sport.

After demonstrating at the Royal Highland Show the previous weekend, the Sealpin team were away from home for nine of the last twelve days. It is important at these busy times to keep the dogs in good condition so they were all enjoying an extra scoop of CSJ Champ! whilst on the road.’

For all the Gundog results, please visit: http://www.scottishfair.com/docs/2017/2017%20Gundog%20Results.pdf

“As you know it was the first time I had attended this event and had a thoroughly great experience – finding everyone so warm and friendly.” Ceri Rundle