At Lunartico, we did have a fantastic start to the show year with Galaxy opening new championships, winning:

and Leo opening a new championship and adding points towards his international championship, winning:

In the photo above, you can see the trophies and prizes we were awarded, and one of Leo & Shane Best of Breed and me & Galaxy Reserve Best of Breed. It’s so lovely to see both of them in the ring together and doing so well. The other exhibitors were really friendly and welcomed us with open arms, and took some lovely photos for us.

Unfortunately, on the way home, in -5 snow and icy conditions, I slipped on icy steps and broke my left wrist, so was unable to show for 3 months, which meant we had to miss Crufts and a few other shows we had booked. But we have slowly started getting back to the show ring now. 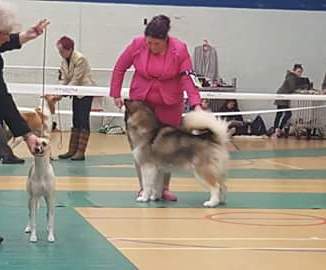 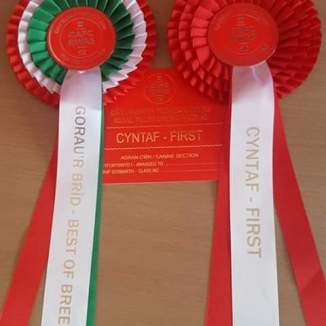 In May, we attended the Royal Welsh Premier Open Show with Ivan winning 1st Open and Best of Breed.  Ivan was also placed in his classes at Bath Championship Show and Three Counties Championship Show, but typical sled dog he has now blown his coat for the summer lol.

We have a few European trips booked over the next few months, so will keep you updated on our travels. We also have a new addition to the show team joining us, a Siberian husky puppy who belongs to a good friend of ours, who has entrusted us to take him with us on our travels and campaign him for her, so it will be a new breed and a new challenge for us.

We are also heading back to the continent later in the year to finish national and international championships there with Leo, Ivan and Galaxy.

In August we are attending the Alaskan Malamute Working Association (AMWA) event down in Salisbury. We will be taking 4 of the dogs down with us..

October and November we are looking at the Euro Show amongst other exhibitions, but we are also planning a litter, so again we will keep you update. In winter, Shane is also planning on a working trip to France with 2 of the dogs, to do their next level working title with the Alaskan Malamute Club of America.

Thor is doing really well and enjoying his well-earned break from the shows. He’s developing nicely now, and his adult coat is starting to come through so he should be ready in a few months to start challenging for his imperial title. He is getting really big now, he’s 19 months and already 6.6kgs! must be all that Command Purrformance he’s eating! The dogs adore him and it’s so lovely watching them all play together. Galaxy has been like a mum to him, they are inseparable.