CSJ’s roving reporter went behind the scenes at the Surrey County Show 2018 Sheepdog Challenge and produced a series of fascinating videos about the organisation, the people and the runs.

The first 19 minute video on https://www.youtube.com/watch?v=ihA5iGiN8Xk is a generalisation over the whole day of the trial and encapsulates the humorous atmosphere between the handlers, organisers, and the judge. 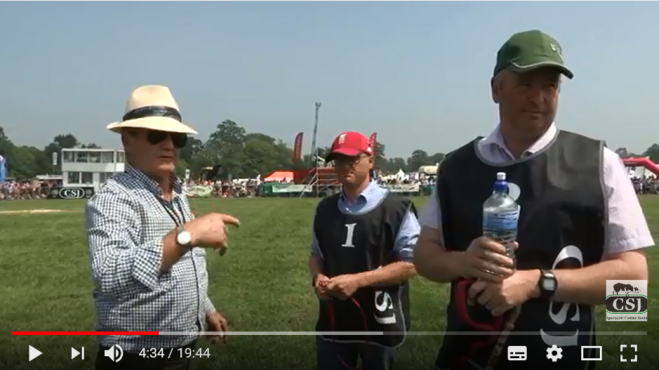 The banter between handlers and judge as he gives his briefing of the course sets the scene then excerpts from the runs are followed by the 3 competing Supreme Champion handlers Aled Owen, James McGee, Ricky Hutchinson, plus the judge, Andy Jackman giving their views of the trial in separate interviews.

As the 4th planned competitor was unable to attend Ricky Hutchinson also gave a brace demonstration with his renowned father and son duo, Jock and Sweep to the delight of the crowd.

The competition was in its second year and the hope is to make it an annual event – judge Andy Jackman commented, “Thanks to Ceri and CSJ for their support, it’s good publicity for the Collie dog.”

To find out which of the 3 Supreme Champion handlers won the trophy watch https://www.youtube.com/watch?v=ihA5iGiN8Xk