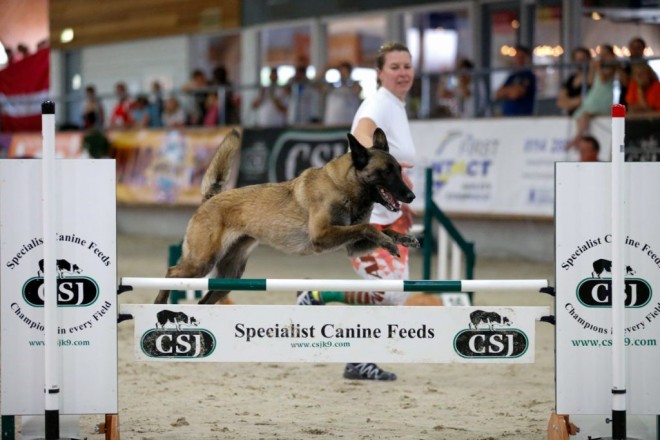 For the last 5 years, CSJ have been the main sponsor of the World Agility Open Championships

Held for the first time in 2011, the WAO is an annual international event and was the first international agility event created and managed by agility competitors. It provides the ultimate in dog agility competition, where speed, efficiency, and consistency are all necessary for success.  All dogs, whether pedigreed or not, can compete in an environment that is solely focused on the sport of agility and the event showcases the highest level of agility training, human/canine partnership, and athleticism.

During the competition, which this year is held from 17-19th May, competitors from 42 countries will arrive in Ermelo, Netherlands to compete for one of four World Champion titles; Pentathlon, Biathlon, Games and Team.  The only inhabited continent not represented is Africa.  There will also be a large number of “Wildcard” competitors, who have applied independently of their countries and been through a WAO selection process. Added to this are Country Managers, Team supporters, Trade Stands and of course the WAO Crew and the numerous volunteers, without whom the event simply could not take place.

The commitment and experience of the Management Team behind the World Agility Open is essential to its success, and has been proven time and again in organising events around the globe.

Heading up the Team is Greg Derrett

Greg has been competing in agility trials since 1989, racking up enviable success nationally and internationally.  His exposure to competition at all levels as both competitor and judge, at home and abroad, gives him a unique perspective as an international agility event organiser.  His goal is to manage competitor-focused competitions, with their safety and enjoyment, twinned with excellence in course design and judging, of paramount importance.

The logistics of the event take some organising, so initial planning for an event starts around 2 years in advance and even longer if a venue needs to be secured.  Ermelo will be the venue until at least 2022 so that is one major factor taken care of for now.  However, internationally renowned judges aren’t available at the drop of a hat and as three are needed, careful consideration is given to this at a very early stage.

Detailed planning starts as soon as the previous year’s competition is over, with Greg often typing notes for the next year on the journey back home to GB.

The WAO Crew from the UK arrive on site on the Monday of the competition week with a clear focus…..to transform an equestrian centre into a world class agility venue, enable two days of training for the competitors, followed by a three day international competition and then leave the venue as if they were never there.  All that in just seven days!! 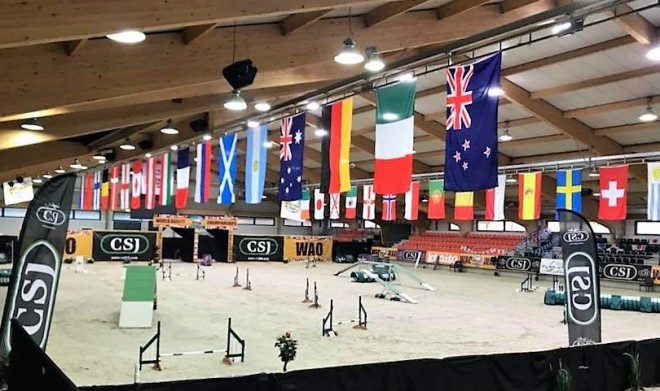 The example above is the main ring.  There are also two outdoor rings to transform.

Days 1 and 2 are all about the build

A huge amount of equipment is either stored at the venue or shipped out from the UK for the event.  This includes barriers, IT equipment, networking systems, thousands of metres of cables, marquees, banners, podiums, country flags and flag poles, paint, signs, stationary and refreshments to name but a few things. All the agility equipment that will be used is also shipped out from the UK.   The UK team of around 20 people will already have been given their roles for the event back in the UK and know exactly what they need to do in the build days.  They are joined by volunteers from the host country to get the venue looking as it should be.   A Team leaders meeting takes place every evening to ensure things are on track. 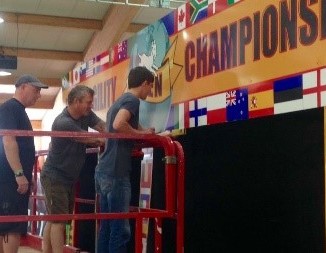 There are also a number of briefings and meetings that take place during these days.  These include meetings between the Judges, Ring Manager Meetings and Country Manager Briefings.  The aim is to ensure that everyone is aware of all the information that they need to know to make sure the event runs successfully. With 42 countries attending, the Managers meeting can sometimes take some time due to the translation required to ensure that everyone is getting the same message.

Day 4 concludes with the Opening Ceremony 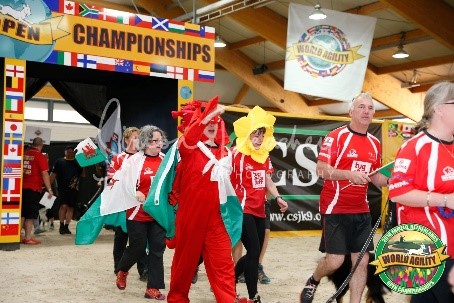 A riot of colour, flags and noise as all competitors assemble in the main arena to declare the Championship open.

In the next instalment we will take a closer look at the competition days themselves.

Thanks always to Ceri Rundle and CSJ, without whose support this event could not take place. 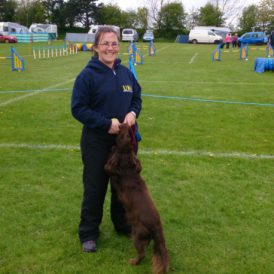 Becky has been involved in agility since 2006 and currently runs a working cocker spaniel. Together with her partner, Neal, she has 4 dogs. Once bitten by the agility bug she soon realised that she wanted to contribute more to the sport and decided to have a go at judging at a club show. Ten years later she has attended a number of judging courses and undertaken a whole range of judging appointments across the UK.

She is passionate about the need for judges to be good role models and enable competitors to develop their skills by setting challenging tests of ability, while ensuring they are also safe and appropriate. She has always been keen to develop her skills further and attended the Global Judging Program in 2016. In January 2017 she undertook the Global Judging Program Assessments and achieved the status of GJP Approved Judge.

She has judged the UKA Grand Finals in November 2016, the Team England WAO Try-outs in September 2017, the CSJ Agility Open in June 2018, the UKI Canadian Open in September 2018 and the CSEN finals in Italy in December 2018.

Becky worked as a UKA representative at shows for a number of years and has become a lot more involved in show management over the last couple of years. This includes the UKA Grand Finals, The CSJ Agility Open, The US Open and The World Agility Open. She really enjoys being involved in event management and is always grateful to work as part of such a fantastic team, who consistently deliver world class events.

The judges were Mr Jeff Ayres and Mr Aled Jones

We would like to thank ous sponsors CSJ Specialist Canine Feeds and Gary McCarthy of Gundog Gear for their continued support. 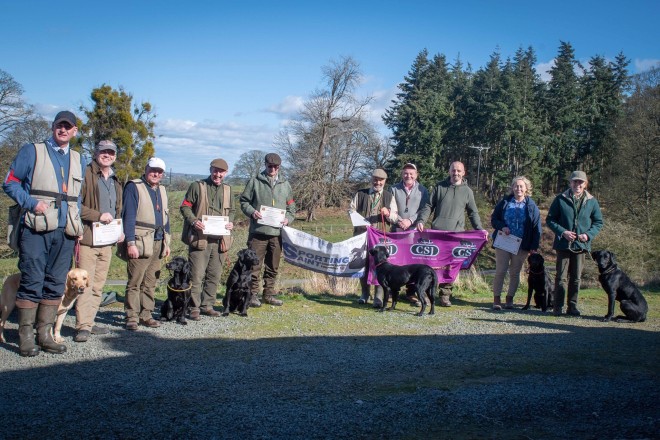 Here’s the results and pictures from yesterdays test at Loton Park,,,

“Another fantastic working test at Loton Park by kind permission of Sir Michael Leighton.  This time round it was the retrievers and we had a great showing with 17 in the Puppy (6-12 & 12- 18), 26 in the Novice and 25 in the Open.  Thank you to all the helpers on the day and for the competitors for all being good sports.  Thank you to Nigel Kirby Photography for coming and documenting the day, any pictures wanted, see his website. Finally, Thank you to our sponsors for the great prizes, CSJ and Sporting Saint.” 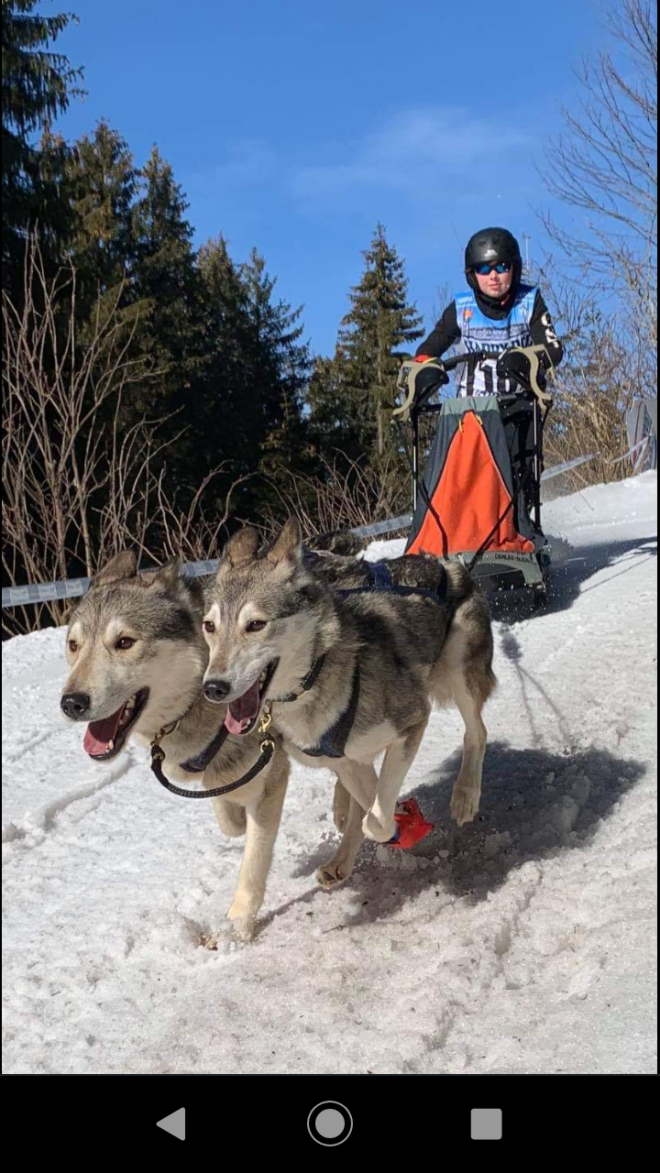 George did well at his first snow race… The youngest competitor there as he only turned 12yrs old a week prior to the world championship. It was his first international race, and his first time representing Scotland. He came 6th overall – photo attached courtesy of Vicky Pullin.

One more race to go at the end of the month (our SDAS race here), then the racing season is over till the autumn… Just keep them running till it gets too warm.. Hopefully into May… And starting off our pups that are a year old now.

We are holding an event to raise money for Olivers ongoing treatment and after care.

Read about Oliver’s Story on his Just Giving page

This is aiming to be a huge sniffathon! maybe even record breaking!

We need to get as many people and dog teams through on the day to sniff out hidden items and clues. It will involve a crime scene, a roadblock, a fugitive on the run, drugs ( not real!) and stolen money.

No previous scentwork experience necessary, providing your dog can sniff out food and is up for some serious sniffing and you are ready for a tired dog then please please come along and support us. There will be someone with you in each search area to help and guide you along so you have nothing to worry about (if you do scentwork please do bring your preferred scent to search for if you would like to).

There will also be goods and refreshments for humans and dogs on sale and tombolas and bottle stall. so even if you don’t want to sniff still come along and support Oliver.
Doors open at 11am, sniffing will start from 1130am and the last dog allowed through to sniff will be at 230pm – your sniffing time should take around 15 to 20 minutes.

We would appreciate a minimum donation of £10 per dog and handler on the day.** if you have a dog that does need space please can you leave them in the car and come in and tell us so we can try and accommodate your dogs needs. If you do not think your dog will cope in a group environment please leave them at home. If we think at any point your dog is getting too stressed we may ask you to pop your dog in your car ** 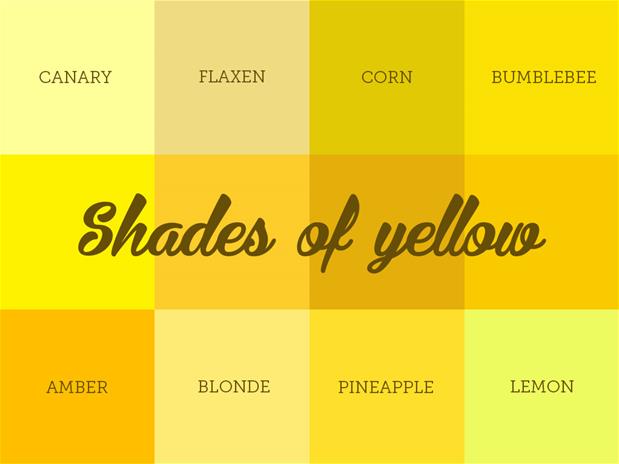 The test went very well with 27 dogs in the novice and 18 in the open!