Photos in no particular order

What a great success the Heelwork to Music Show was this year.

As I write this my Facebook page is filled with posts from people sharing their photos and congratulations to the organisers and helpers and there are many more messages on the Dog Dance Forums. The feedback has been great and included positive comments on our DJ who goes above and beyond the call of duty, the wonderful home baking that Anne brings (OMG that mouthwatering fudge), the calm environment as well as the friendly welcome and the lovely venue.

The weather could have been kinder to us with the first day being a little damp, but the second day picked up greatly. And despite our sharing the venue with a wedding the venue staff were so very supportive and helpful – as indeed they always are.

The Starters Classes saw Jackie McLaughlin and Brachen in all four classes. In the Heelwork Classes they performed to ‘My Old Man’s a Dustman’ by Lonnie Donegan. This routine had lots of comic elements with Brachen pushing his bin across the ring and finishing with his head in the dustbin and they picked up a 4th and a 6th place. 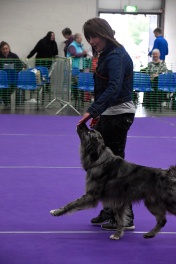 The theme was a school with Kathryn dressed in a mortar board and gown and with Quista starting and finishing sitting up on a bench. They had lots of props to help tell their story from a lunch bag to dunces’ cap and Quista enjoyed weaving amongst these. They finished just outside the top six places in seventh, but we have something for everybeardie at our show so they received the Best Bearded Collie in Class Rosette which Anne Stewart has sponsored since our first ever show. Jackie McLaughlin and Brachen were also in this class performing to Pick a Pocket by Victor Spinetti and Boys and provided an entertaining routine which included some very memorable tricks with Brachen ‘drinking’ out of a bottle, jumping on Jackie’s back and hiding in a box. They picked up a place and a great deal of applause and laughter.

Novice Heelwork saw Marie Docherty and Mr. Walt I Am Wooly Wonka aka Walter in the Novice classes

They did training rounds on both days as Marie has only had Walter for around 15months and he is in his fourth home having come via Beardie Rescue. The freestyle routine was very entertaining with Marie and Walter performing as ‘children’ playing to ‘See Emily Play’ by Pink Floyd. This was full of some really unusual and well executed tricks such as Walter spinning a box and some super control as he waited in his window to be called out to play.

On Friday, Jackie Riddell was also in this class with her working Beardie, Miss B’haven Redefined performing to ‘Calling All Workers’ by Eric Coatest Symphony Orchestra. Afraid I didn’t see the routine but in the places were Michelle Porter and Jax Factor – no he’s not a Beardie but Michelle is on our Committee. Jaxon the Bichon Frise pulled off 4th place in this class of 14. 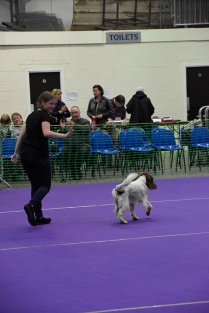 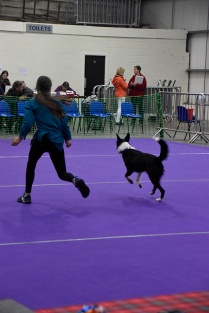 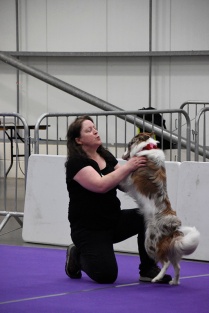 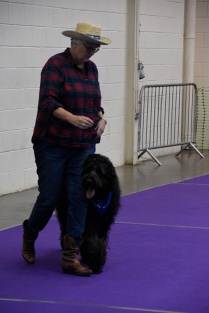 Michelle and Luna (Princess Punk) were in the Intermediate classes

In the Heelwork to Music Class and performing to Ed Sheeran’s ‘Galway Girl’ they were pipped into 2nd place, unlucky since this partnership are one win away from making it into Advanced HTM. In the Freestyle where they are also just waiting for their second win, they picked up a 4th and a 5th place performing to ‘Touch the Sky’ by Julie Fowlis from the Disney film ‘Brave’.

The Advanced Classes had three Beardies – all mine!

And we had a very successful show, Dare (Dare to be a Daniel) won the Freestyle classes on both days performing our routine to ‘Eyes Shut’ by Years and Years. The theme is about not being able to see the damage being done to the world. She was a very lucky girl as her ‘sister’ Google finished second in the Freestyle on the first day on exactly the same score with Dare only beating her as her Musical Interpretation Score was higher.

Google’s performance was to Lily Allen’s ‘Somewhere’. This routine has some spectacular moves which really showcase the athleticism of a young bouncing Beardie such as jumping onto my back and into my arms. However, the Freestyle was all about Dare as she added the Crufts Semi Final Qualifier to her Heelwork Qualifier gained earlier in the year. 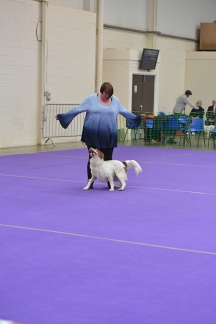 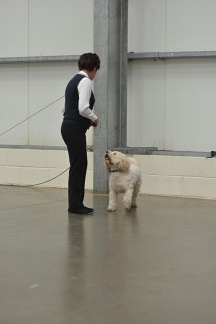 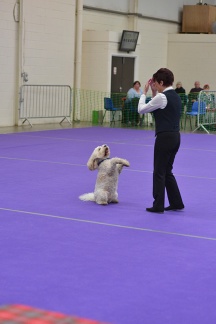 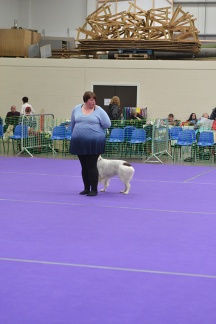 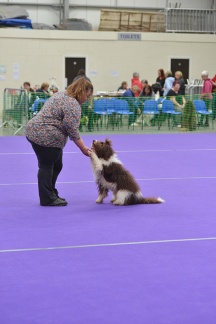 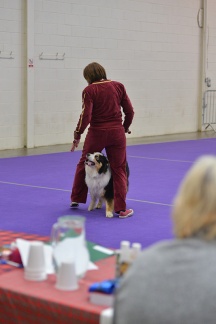 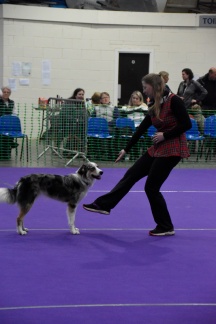 Her music was ‘Sway’ by Il Divo and the interpretation is all about cleaning! I arrive in the ring with my able assistant Gertie, I take off my coat, remove my duster, decide to pick up a polish spray and we do some cleaning, including dusting Gertie’s bottom. Of course, cleaning is not as much fun as dancing so the polish is discarded and at the end we are dancing. 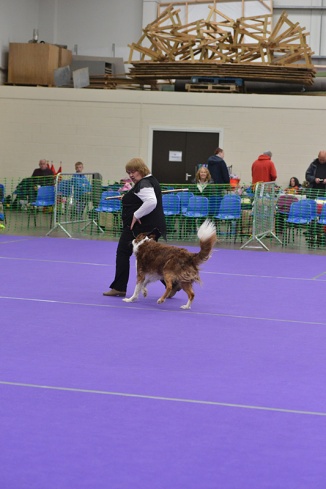 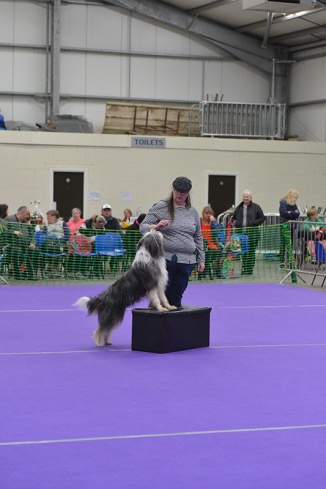 We have annual trophies that are presented at the show and this year the Scottish Starter of the Year Trophy went to Jackie McLaughlin and Bearded Collie, Brachen

This trophy is awarded to the Starter with the most points over the year leading up to the show. The other Annual Trophies include The Backstage Trophy which this year went to Willie the Health and Safety Officer at the Market who is a constant support, The Pat Scott Memorial Trophy for the best newcomers in Starters Freestyle across both days that went to Deborah Morgan and her NSDTR Fitznitser Amber Eclipse, and the Bonnie (Runival Sgurr an Lochain) Trophy for the best newcomers in Starters Heelwork across both days which went to Lynn McFarlane and her Labrador, Gallowmar Midnight Morna. 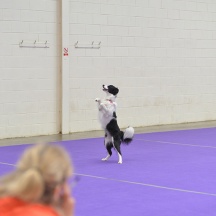 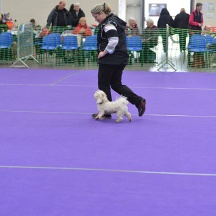 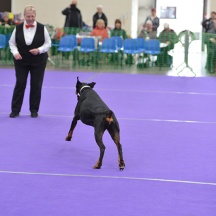 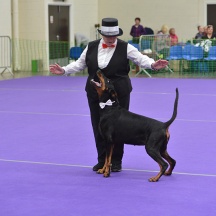 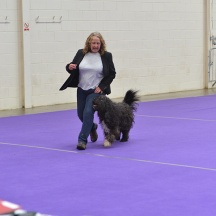 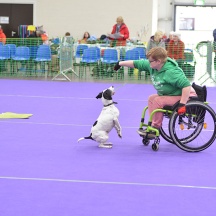 This is very generous and we hope they will continue their sponsorship into next year. We also have Tunnocks to thank for continuing their sponsorship and of course Penny and John Mansfield who sponsor the beautiful rosettes and sashes. And As I have already mentioned Anne Stewart for those stunning Best Bearded collie rosettes for every class.

It would be remiss of me not to thank all the people who help out. So many folks step up to make sure the many tasks required to ensure the show runs smoothly are undertaken such as helping competitors with their props, making sure the running order is adhered to, timing and so much more! Ken Handley so very kindly does our Scoring program which we so very much appreciate.

The Thursday night laying of the carpet and setting up always bring people to help and we genuinely could not do It without them. A big shout out to Marguerite Robertson and Helen in particular who give up their time and don’t even take part in the show, and a massive thank you to everyone else who helps out too.

If you are interested in getting involved in Heelwork to Music or Freestyle our Branch is in a very fortunate position of having plenty of experienced people who can help you with advice or point you in the direction of your nearest class or workshop. So do get in touch with Anne Stewart, Michelle Porter or myself via our Facebook page: 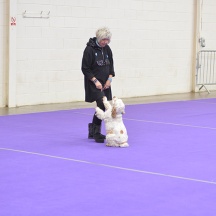 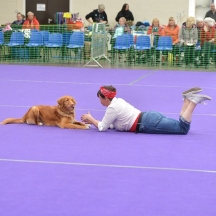 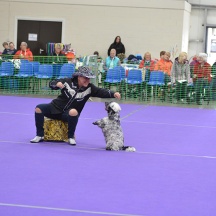 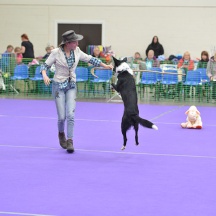 We had people from all over the UK. Lots of different breeds of dogs including gorgeous:

Note. All the dogs mentioned by name are Beardies 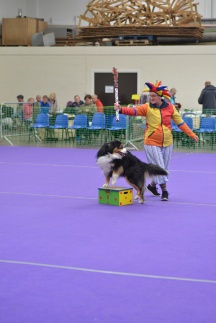 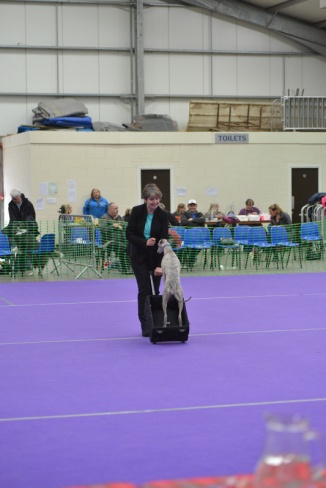 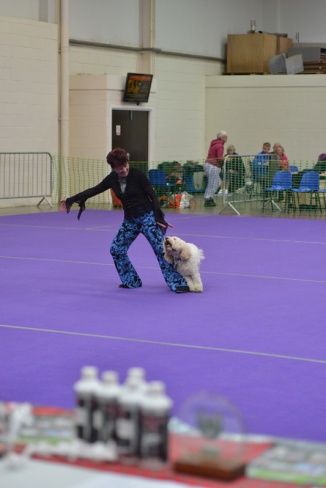