Rio the black Labrador is 2 years old… He’s done well in tests and has started to take part in trials.

Drake is a 4 year old labrador, who I bought when he was 17 months old. He has won a great number of prizes over the 3 years of competing in gundog scurries. Through the shooting season he also picks up with my other 3 labradors,  sometimes doing 5-6 days a week.

Both dogs are fed on CP30 and Adult Champ. 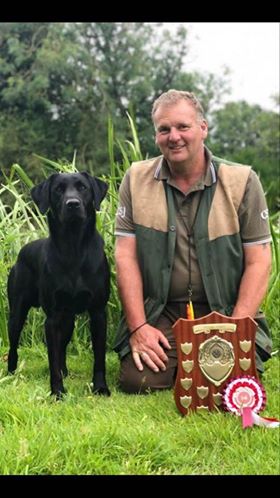 Cupar, the German Short Haired Pointer was re-homed with us 7 years ago at the age of 5

He was in a racing kennel with approx 20 other dogs, the majority of them were huskies. He was kept outside all year round and had never been inside the house and at first he struggled being in the house with us, but he settled in after a few weeks. He had been training and racing in his previous home and we got him on the Sunday and raced him in a bikejor race the following week and we won our first race together.

We had 5 huskies, all young dogs when Cupar came to us and through training with him the teams improved their commands, turns and focus and now runs past deer, people and dogs, off-lead with no issues.

Love him to bits

It is down to working with Cupar that our teams have had and continue to have success on the racing circuit. He has also helped trained countless other peoples dogs, as well. If people are having issues with their dogs running or commands etc. we bring them along and run them with Cupar. He shows them how it should be done. They follow him and a few runs later, the issues are usually rectified. We’re currently running him with 2 other dogs – one a young rescue. to get them on the right track. He has taught me so much.

“We have used CSJ CP30 and Hike On since 2014 – the dogs love the food and always empty their bowls at every feed.   The dogs train and race hard and CSJ provides them with the energy goodness and stamina to achieve top level results season after season”

Wow, the world has changed massively since my last blog. Who would have thought nearly half the world’s population would be in a lockdown situation under the threat of a nasty virus back in February.

It’s a huge challenge to the world. I have been home based for the last six years, so I’m lucky that I’m used to this way of working. We also have space to get out for daily exercise and living in a rural area means social distancing isn’t a problem either. However, I do understand the challenges, the worry and uncertainly other people are experiencing and readily offer my support where I can.

In March I announced my retirement as the Team Manager for Agility Team GB. I had always planned to review my position in 2020, and after seven years in the role I decided that the time was right to hand over the reigns.

My time as Team Manager has been immensely rewarding. Of course there were challenging times and some incredible highlights too. In a role like that you grow broad shoulders and learn a lot about people; I’m sure there’s a future book in my journal somewhere.

I thought I’d have a lot of time on my hands now with no agility shows and no team manager responsibilities. However I’m finding myself busy with other projects and interests that have been on hold… a subject for future blogs.

I hope all our readers keep safe in these difficult times. And if anyone wants any hints and tips about working from home I’m more than happy to share. Here’s a little update on Maddi and the dogs.

Maddi is enjoying her new found freedom from school, it means she can spend every waking minute with the dogs. I’m sure they are looking at me asking when will she return to school!!!!

All races may be cancelled but Maddi has been out training daily, 1/2 times a week a short 2km canicross run with her training dog Bella the spaniel. She even tried 100m sprint with the Pup (11 months) and managed to stay on her feet!

Daily scent work and games with the dogs in the garden. Lots of off lead walks and free running. Most importantly daily trampolining!!